French architects’ verdict on The Barn

‘L’Ancienne Grange’ or ‘The Barn’ as we imaginatively call it, is a very old oak framed barn in the Riberac area of northern Dordogne. 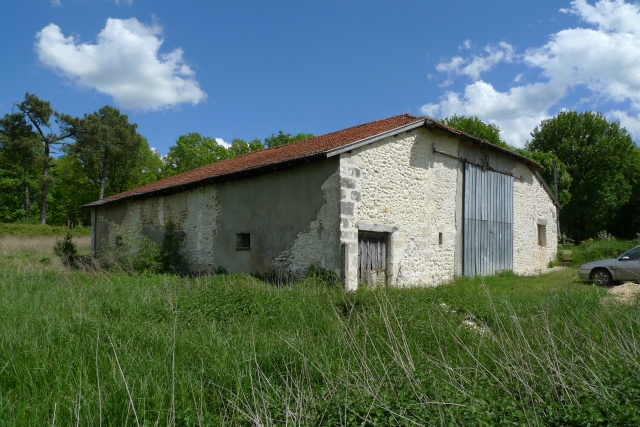 As you can see, it’s still very much in its ‘barn’ phase at the moment, and needs a lot of adaptation before it becomes a workshop and living space for myself and my partner Hannah.

Two local architects who specialise in old buildings (one works for Bâtiments de France) visited us a little while ago and their best guess as to the date it was built (based on the style of the corner stones – the ‘coins’) is anywhere between early 17th and early 18th Century.

It’s huge – 340 m2! We can already live in one part of it, which was converted before we bought it (spot the difference in the slideshow below). As you can see, there’s a massive amount of work to do on the rest!

The Barn got planning permission in 2002 but this has expired so we need to start anew, which is also a chance to review the designs. The local architects both specialise in traditional architecture, so they were very enthusiastic about a barn that has kept its character more or less intact after several centuries. We’re keen to keep its character too – for example, we’ll use ‘colombage‘ (lath and plaster walls with timber frames) for the interior walls. However, as you can see from the pictures below, we need light in there, so some large openings are going to be essential.

My plan is to have French windows leading onto a large green oak terrace on the first floor, overlooking the hills to the north-west. This would give us a space outdoors that gets the sun almost all year round – and a shelter (underneath) which I could use as a fair weather workshop. Whether the DDE (the French planning authority) will go for that remains to be seen!

I’ll be blogging here from time to time on our own big renovation project. In the meantime, here are some more photos of the barn. As you can see, the sturdy green oak cross frames are still doing their job after hundreds of years:

I started timber framing fifteen years ago in the South West of England, working mostly for the Timber Framing Company. For the past fourteen years I have worked as a sole trader in the UK and France. Most of the projects you see on this website are in Somerset, Gloucestershire and Dorset, with a growing number in the Dordogne. In October 2011, I set up Charpentes Louis Maw, a French-registered business in the Dordogne. We design and build green oak and Douglas fir timber frames in the Charente, Lot-et-Garonne, Gironde, Dordogne and surrounding areas of South-West France.
View all posts by louismawgreenoak →
This entry was posted in Barn conversion and tagged 18th century, architects, barn conversion, oak frames, permis de construire, renovation, terrace, timber framing. Bookmark the permalink.